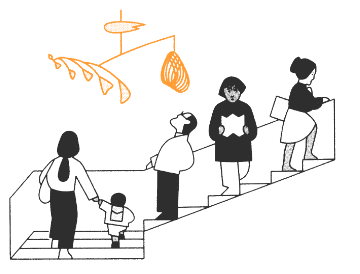 MoMA Board member Larry Fink is CEO of BlackRock, the 2nd largest shareholder of prison companies GEO Group and Core Civic. With over $2 billion in contracts with Immigration and Customs Enforcement (the racist and vicious enforcement arm of America’s racist immigration policies, known as I.C.E.), GEO Group and Core Civic are responsible for over 70% of all immigration detention including caged children, families separated at the border and in the interior. Additionally, Core Civic and Geo Group hold most of the 116,000 nationals in federal and state cages. The nation’s largest private prison corporations, these two companies earn billions each year from caging people and every day a prison bed is occupied means a day of profit for Larry Fink.

As a stipulation in their contracts for individual prisons, Core Civic and GEO Group typically require 90% or more of prison beds to be filled. These contract clauses and the millions they spend on lobbying and campaign contributions ensure that state and federal governments work for them to create more criminals and detainable immigrants. Like all prisons, these operate in the shadows, but are even less subject to public scrutiny, because their records are exempt from the open records laws that apply to other federal prisons. As a result, every ICE facility has passed every inspection since 2012, even those where multiple people have died. Things are so bad that even banks like JP Morgan succumbed to divestment pressures. But MoMA Board Member Larry Fink keeps funneling them money and reaping rewards.

Not by the way, Core Civic started out in the 1960s as a plantation prison using unpaid convict labor. It is now a $2 billion corporation traded publicly!

BlackRock also owns lots of shares in war companies. Every major merchant of death is in its ‘diversified’ portfolio: Lockheed Martin, Boeing, Raytheon, General Dynamics, Northrop Grumman. The director of General Dynamics and his wife, not by the way, also contribute to MoMA’s war machine, with a major room in their name. Those companies may name themselves as defense contractors but they profit from attack and escalation. They have made a profit by selling to some of the most brutal regimes in the world in some of the most brutal crackdowns, including Israel’s ongoing destruction of Gaza and other violent assaults in its settler colonial project. Defense for Children International, for example, reported that in the 2014 assault on Gaza at least 225 of the 550 children killed in the 50-day assault, died from Israeli warplane attacks, including by Lockheed Martin F-16 fighter jets.

With all this, it should come as no surprise that Larry Fink himself is a contributor to the NYC Police Foundation, an organization that enables rich people and corporations to funnel legal bribes into the NYPD, helping them pay for everything from bulletproof vests to tear gas and horses.

Violence and destruction take many interrelated forms. Many of the violent regimes that use those weapons, use them to assault protestors, often indigenous ones, who object to displacement and destruction due to mining, oil extraction, and luxury developments. Larry Fink owns big shares in all of that too. BlackRock is a major investor in oil companies and fracking; for example, it is the fourth biggest investor in Range Resources, with the most drilling wells in the Marcellus Shale region; it is second biggest beneficial owner of Exxon Mobil and the 3rd Biggest owner of Wells Fargo which financed DAPL; it counts amongst the largest owners of many mining companies, including Rio Tinto, which several times have been charged with violating indigenous rights and human rights around the world.

Larry Fink has been making a lot of noise, without a sense of irony, it is believed, about taking the lead on corporate responsibility.